A collection of Kastia guides for your convenience.

Ayame is a custom class based on the mini-class from the Hieizan Temple dungeon introduced in GMS v152. Ayame is a Pirate character who uses STR as her primary stat, Pirate equipment for her armor and accessories, and uses two-handed axes and two-handed maces as her weapons. Ayame features her own 5th Job skills, V-Matrix Boost Nodes, and her own custom Secondary Weapon. Ayame gains 2 SP every level starting at Level 30 up to Level 200, and can gain additional SP by exchanging Mastery Tokens.

To make an Ayame yourself and start playing, select Explorer at character creation and select the Ayame job.

Ayame’s Skill Book can be accessed through the Ayame’s Diary item in your Use inventory, or by opening your first job tab and placing an SP point into the Macro Test skill. 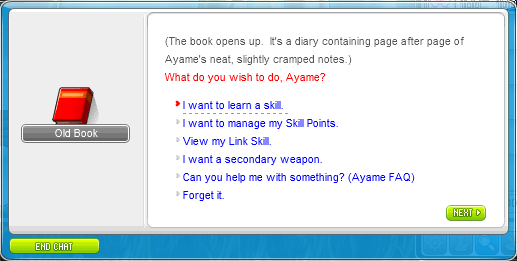 To add SP, click I want to learn a skill and click the skill you want to add points into. Most skills have a required character level before they can be increased, which is listed at the top of the skill description. 5th Job skills are not added through the Ayame skillbook, and are instead managed through your V-Matrix which appears in your Second Job tab after you reach level 200. 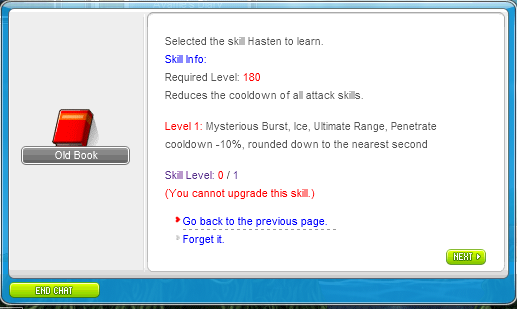 
Adds a skill in your Beginner tab that lets you perform a forward rush.


Adds a skill in your Beginner tab that lets you leap high into the air.

Level 1: Leaps into the air


Adds a booster effect to the Vengeful buff. The skill will increase your attack speed while active. Does not affect party members.


Adds a damage effect to the Vengeful buff. The skill will increase your critical rate while active. Does not affect party members.


Adds a piercing effect to the Vengeful buff. The skill will increase your Ignore DEF ratio while active. If you are in a party, this skill will only apply +10% to party members.


Adds a damage effect to the Vengeful buff. The skill will increase your damage to bosses while active. If you are in a party, this skill will only apply +10% to party members.#k


Permanently increases all of the character's attributes. Does not stack with Maple Warrior (or variants).


Every consecutive attack on a monster increases your attack power, up to a set maximum. Rising Petal stacks reset after 15 seconds of not attacking. Gunpowder Blossom - Mysterious Burst accumulates stacks at a 15% chance only. A visual effect will be displayed on your character when stacks reach max.


After every attack, there's a chance to deal an additional attack that deals extra damage.


Toggleable skill. While active, greatly increases your damage and Critical Damage. Cannot be used while Blossom Stance is active. You can only switch stances once every 5 seconds.


Toggleable skill. While active, increases your Abnormal Status Resistance and allows you to rapidly recover HP and MP. Cannot be used while Gunflower Stance is active. You can only switch stances once every 5 seconds.


Every use of Gunpowder Blossom - Link increases your weapon ATT for a few seconds.


Permanently increases all damage dealt by you. Can stack with Epic Adventure (or variants).


Reduces the cooldown of all attack skills.


Causes Vengeful to become undispellable by monsters, and increases its duration. Does not affect party members.

Level 25: For 55 seconds, grants all party members a buff that applies the effects of your current stance (at the time of activation). Your Final Damage will increase by 22%, and all your attacks will gain a 38% chance to automatically activate Gunpowder Blossom - Penetration. Activation chance is reduced to 26% during Mysterious Burst. Cooldown: 120 sec


Grants you the protection of the Six Flowers.

Jump to
Powered by phpBB™ • Design by PlanetStyles